Campus Ministries, Habitat for Humanity, repair homes for the poor 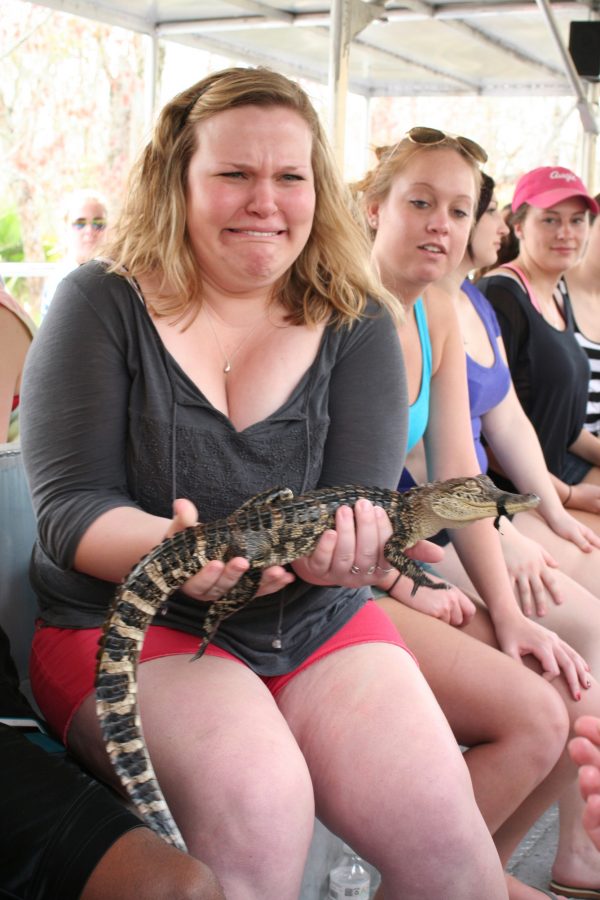 Campus Ministries and Habitat for Humanity at Augustana went on annual mission trips during spring break to repair homes for the less fortunate.
Campus Ministries went to Henderson’s Settlement in Frakes, Ky. in the Appalachia region. Habitat for Humanity went to Gray, La., an hour southwest of New Orleans. Each group was gone for a week.
The groups worked on house repair including painting, flooring, fixing a porch and a ceiling.
“A large ceiling of quite a large living room was collapsing and so we had to tear that down and put in insulation and sheet rock,” said Rev. Richard Priggie, chaplain of the college. The Kentucky trip was Priggie’s 14th mission trip through Campus Ministries.
There were 43 students and eight adults and parents that went to Frakes, which is in Bell County, one of the poorest counties in the U.S. According to the 2000 U.S. census, 31.1 percent of the Bell County population was below the poverty line.
With 21 students and adviser Markus Harris, Habitat for Humanity worked on two houses, painting and fixing siding.
Habitat for Humanity is an international nonprofit organization founded in 1976, which builds affordable housing for the poor. Augustana began working with the organization in 1996.
Senior Katelyn Lazar, president of Habitat for Humanity at Augustana, and junior Courtney Jankowski, vice president, chose Louisiana for this year’s trip because they thought homes would still need repair after Hurricane Katrina.
“A lot of the residents who didn’t have a home in New Orleans moved out to the area we built,” said Lazar.
The Habitat trip was Lazar’s fourth trip and Jankowski’s third. Lazar said the majority of students that went on the Habitat trip had previous experience in house repair.
“By this time I feel like I’m pretty experienced as a senior to build,” said Lazar.
Any student is able to go on either trip. Priggie said students do not have to have been involved in Campus Ministries in the past to attend the trip.
“The recruitment is really a lot of word of mouth because it’s a pretty powerful experience,” he said. “The students who go on it really enjoy it a lot, so they tend to talk it up.”
Each trip included a free day, where students could explore the area. In Frakes, students visited the local towns.
“On Friday, those of us who had finished their projects in the community got to help make the apple butter,” said Priggie, “which was a lot of fun.”
In Louisiana, Habitat students traveled to New Orleans on Mardi Gras, trying local food and going on a ghost tour.
Jankowski summarized her favorite part of the trip as “engaging in the culture of New Orleans and the Cajun culture.”
Students from both trips met the homeowners of the houses they were repairing as well.
“We also meet some amazing people,” said Priggie. “We often find the building projects are not the most important thing; it’s the relationships we make with the homeowners and with one another (that) are really important.”
Campus Ministries and Habitat are organizations that are Christian based. Priggie said faith, which is about relationships, drives the mission trips every year.
“We see this as a real extension of our faith, so that our faith teaches us to care for others, particularly those in most need, the most vulnerable in our society.”