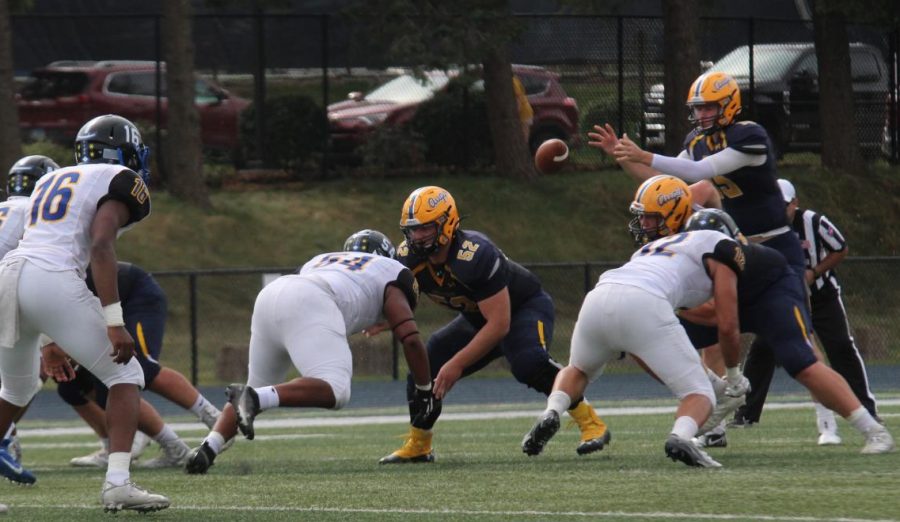 North Park 17-14. Every team in the conference is competitive so junior Xavier Buckley believes

any win against a conference team is worth celebrating.

conference is just going to lay down and take a loss,” Buckley said.

Senior Matt Payton views the homecoming game as an opportunity to win not only for the team,

but for everyone else in the Augustana community.

“Winning a homecoming game is always special. It means a lot not only to the team, but to the

coaches, former players and alumni to see us represent Augustana with a win,” Payton said. “It

brings great pride to everyone who is an Augustana Viking.”

The win against North Park was much needed since the team had just come off of two losses,

one of which was in overtime against Milikin.

The homecoming football game has become an Augustana tradition and many of the players,

including senior Mikey Scarpinato, are honored to be a part of the tradition.

come to support,” Scarpinato said. “It’s cool to be a part of such a rich tradition.”

Some of these alumni are not just Augustana graduates but also these players’ former teammates. These teammates have been role models for these upperclassmen, and playing in front of them is an opportunity to show all that they have learned from the previous football players.

“It’s awesome to show them how we, as a team and a program, have developed because of the

leadership and guidance they gave us in previous years,” Payton said.

The homecoming game was canceled last year due to COVID-19, so bringing it back this year made the game much more meaningful than it’s been in previous years.

“This one was different from previous homecomings without a doubt,” Payton said. “Not having

a true homecoming game last year due to COVID-19, meant that this one had extra weight to it.”

With improvements in COVID-19, players have noticed more of an attendance at the games and

are grateful for the support the Augustana community has been giving them this season.

we have had in the previous two that I have been here,” Buckley said. “The stands have been

packed the past two home games and both games were exciting, and it was great hearing how

loud the fans got.”

them to continue working towards some of their team goals for the season.

Making it past the regular season won’t be easy by any means, but the team has other goals set

in place to get them as far as possible this season.

your role on the team,” Buckley said. “This means no matter if you are a starter on game day or

on the scout team during practice you work hard because that makes the team better.”

The team’s record currently is 2-2 and they are aiming for a winning season. The last winning season for the football team was 2019-2020,  in which they ended with a score of 6-4.

another winning season that is even better than the 2019-2020 season was.

The football team’s next away game is against Wheaton on Oct. 9. With the momentum

the Augustana football team has coming off of the homecoming game win, it will be very exciting

to see all that they can accomplish this season.