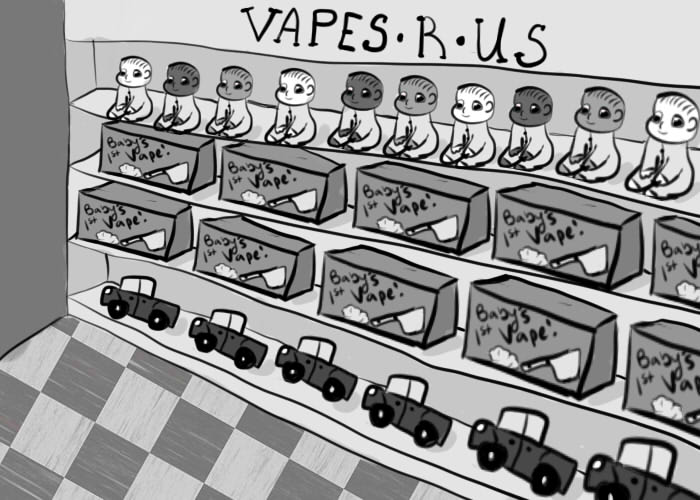 Teenagers these days would do anything they consider “cool.” They don’t think about the risks, harm and damage a small device like an E-cigarette can do. There has been an insane increase of E-cigarette usage among teenagers. It has jumped 78% from last year.
E-cigarettes were developed in the past to help smokers quit. The E-cigarettes gave them a way to satisfy their nicotine cravings without the deadly carcinogens that come with burning tobacco. However, they have been misused lately by many teenagers.
The FDA has put bans on sales of flavored e-cigarettes in convenience stores and gas stations. They have also strengthened the requirements for age verification of online sales of e-cigarettes. Since teenagers make most of their E-cigarette purchases online, many websites have been asking for a photo upload to make sure it matches the ID.
More than three million middle and high school students reported using e-cigarettes. Many of these teenagers are encouraging each other to smoke by posting pictures of themselves on social media with “cool kids” captions. E-cigarette companies don’t even have to do social media marketing because its young customers are doing it for them. If teens are going to smoke, that’s one thing. But encouraging their friends to smoke as well is taking it to a whole new level.
Juul, the leading and largest maker of E-cigarettes, said it would ask the major social media companies, including Twitter and Snapchat, to help them “police” posts that promote the use of e-cigarettes or cigarettes by underage users, but the damage has already been done.
Things are getting out of control. Smoking could be fun and cool but when their effects start kicking in, it won’t be fun anymore. Cigarette smokers are more likely to get into fights, carry weapons and attempt suicide than non-smokers.
When these teens want to stop smoking but can’t due to the addiction, it won’t be as fun. When these teens start dying early, it won’t be as fun. When they start developing heart attacks, it won’t be as fun. When they start developing anxiety disorders, it won’t be as fun. When they start developing depression, it won’t be as fun.
Your lungs are only supposed to breathe air, the less polluted, the better. If you want to reduce the chances of lung damage, don’t smoke or vape anything. Just because it looks fancy does not make it safe for anyone. A toxin is a toxin. Done.
Cartoon by Cassie Talbot