Road to the Oscars: The Big Short provides big reward 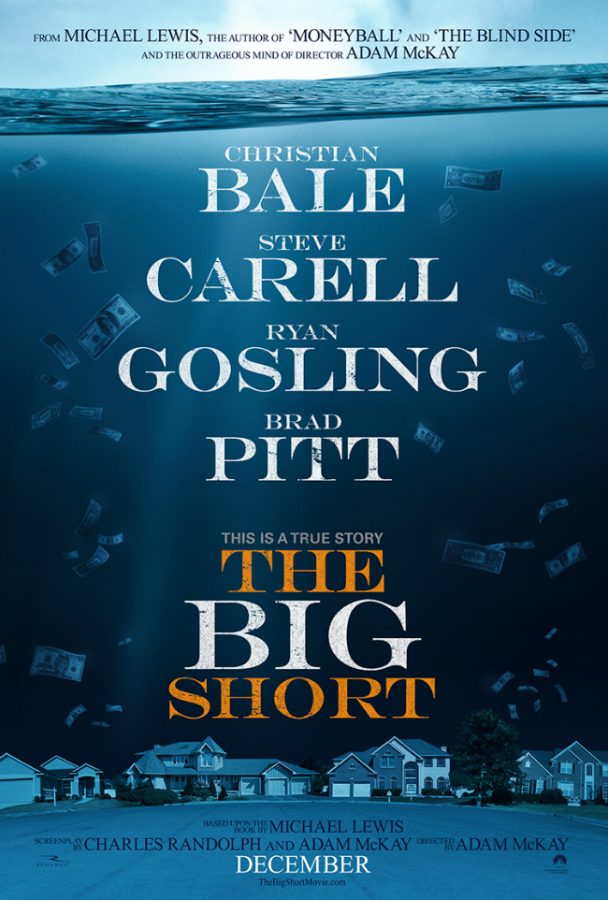 Subprime loans, the housing market, and credit defaults are the subject of director Adam McKay’s The Big Short. Somehow, McKay takes a complicated economic issue and turns it into any moviegoers dream.
Based on the non-fiction bestseller (The Big Short: Inside the Doomsday Machine) by financial journalist Michael Lewis, the biographical drama provides insight into the financial crisis of 2007.
Led by an unconventional quartet of stars like Christian Bale (Dr. Michael Burry), Steve Carell (Mark Baum), Ryan Gosling (Jared Vennett) and Brad Pitt (Ben Rickert), the film brings sarcastic humor and constant, but necessary explicitness to an issue that led to a global economic crisis.
Bale and Carell steal the show, hands down. Bale, tackles the role of Dr. Michael Burry, a former neurologist who becomes the hedge fund manager of Scion Capital.
Bale expertly maneuvers the challenge of a prosthetic eye, Asperger’s syndrome and wearing the same t-shirt the entire movie.
Carell, in yet another surprisingly serious role (think Foxcatcher), takes on the role of Mark Baum, a temperamental and normal crusader managing the hedge fund FrontPoint Capital.
Carell’s performance is poignant and well-polished with heart-wrenching moments that penetrate the otherwise cruel and sarcastic environment of Wall Street.
Even those with lesser roles like Charlie Geller and Jamie Shipley, played by John Maguro and Finn Wittrock respectively, add a little relief to the film. The bumbling young guns of finance serve as the perfect underdogs, playing off the serious economic hardhitters that dominate the film.
With each passing scene, the characters each show sparks of financial genius, engrossing the audience in a story that depicts the corruption and hypocrisy in the years before, during and after the crisis.
However, that’s not what makes this film great. McKay slyly and humorously makes the story human. Rather than stick to number crunching, McKay harnesses the raw anger of the millions of Americans that were affected.
Not only does McKay employ a finely tuned cast, as well as a brilliant screen adaption, he cleverly brings elements of documentary cinematography to the forefront.
By flashing images of those affected by the crisis, it allows the audience to connect with the stories onscreen, almost like flipping through the pages of a newspaper or magazine. The reels are quick, but sobering. A reminder of the scathing truth within the film.
The Big Short provides carefully crafted documentary style musings from each character, and even breaks the cinematic fourth wall by allowing celebrities (Margot Robbie and Selena Gomez, amongst others) to address the audience with textbook definitions for the many finance and real estate jargon.
You don’t have to be a finance or economics guru to understand or appreciate The Big Short. In fact, I highly recommend this film for its ability to explain the housing crisis of 2007 to even the least financially inclined. After all, it’s still a humor-filled, star studded film. While I wouldn’t call it a masterpiece, it’s as close as a film about finance can get.
In the end, The Big Short is informative, emotional and extremely entertaining. Its Academy Award nomination for Best Picture is well deserved.
Tune into ABC on Feb. 28 to see if The Big Short takes home an Oscar.